In January, I traveled on my first trip to Africa - to Bekoji, a small rural village in the highlands of Ethiopia, about a 5 hour drive from Addis Ababa. I was there to participate in the first ever all women’s 100 mile relay across Ethiopia - from the Bale Mountains to Bekoji with Girls Gotta Run Foundation (GGRF). Girls Gotta Run Foundation is non-profit organization that invests in girls who use running and education to empower themselves and their communities.

About Bekoji: the village of Bekoji, in the highlands of Ethiopia, has produced long-distance runners who have won 16 Olympic medals, in 20 years. In Ethiopia, where the gross national income per capita is $400 and nearly 40% of the population lives below the international poverty line (of $1.25 per day), running offers a means of building a life outside of cyclical poverty and having the honor of contributing to the Ethiopian national identity. GGRF has worked in Bekoji, Ethiopia since 2014 and is the only non-profit organization supporting female athletes in Bekoji. 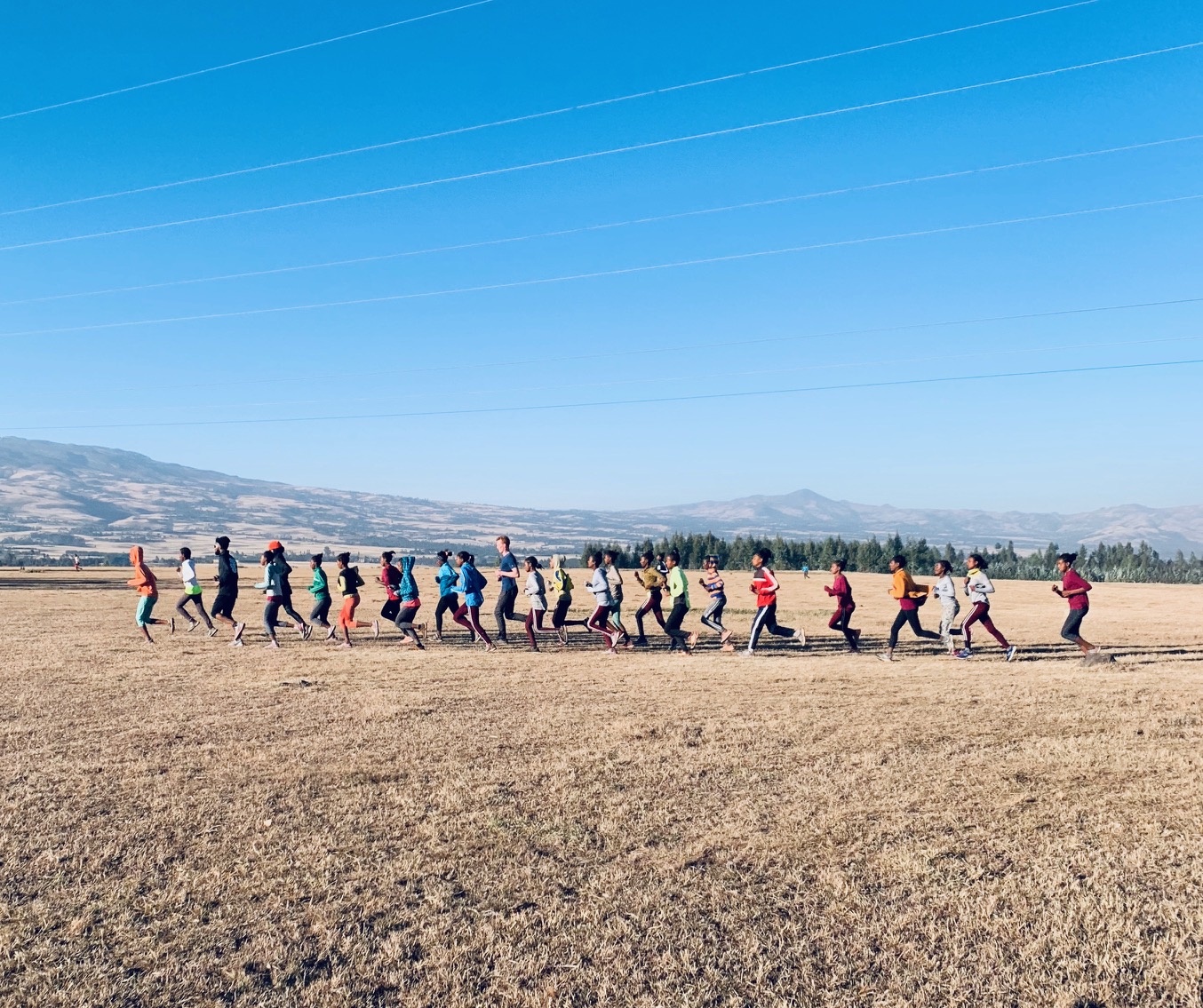 We arrived in Addis Ababa late on Saturday evening, so Sunday was my first full day. It also happened to be Christmas Eve in Ethiopia, as Christmas is celebrated on January 7th in the Ethiopian Calendar. Ethiopia uses a different calendar and time system entirely in fact, so during my trip it was actually March, 2011 according to their calendar.

We spent the day wandering around a neighborhood called Piassa. Everybody was out and about buying their goats, cows, chickens, and produce to prepare Christmas dinner. We visited Ethiopia’s first hotel, Hotel Taitu, which looks like the set of a Wes Anderson film. We also went to a record “shop”, that was more like someone’s living room, to browse original presses of Ethiopian jazz records from artists such as Mulatu Atstake. If you’ve never heard his music, I highly recommend it!

In the evening, we all met for a traditional Ethiopian group dinner with the international women on the trip, as well as the staff and crew of Girls Gotta Run and the Bekoji 100 relay. We feasted on Injera, which is a spongy pancake-style bread, made of teff flour and fermented, with lots of vegetarian dishes such as Shiro, Misir Wot, and Keysir Salata. I have always loved Ethiopian food. The gut-friendly fermented bread and high protein and iron plant-based dishes are extremely healthy for you. Plus - you eat everything with your hands! If you are looking to try Ethiopian food here in Brooklyn, my favorite place is Bunna Cafe in Bushwick. Go with a loved one and order a feast for two, along with a bottle of honey wine! 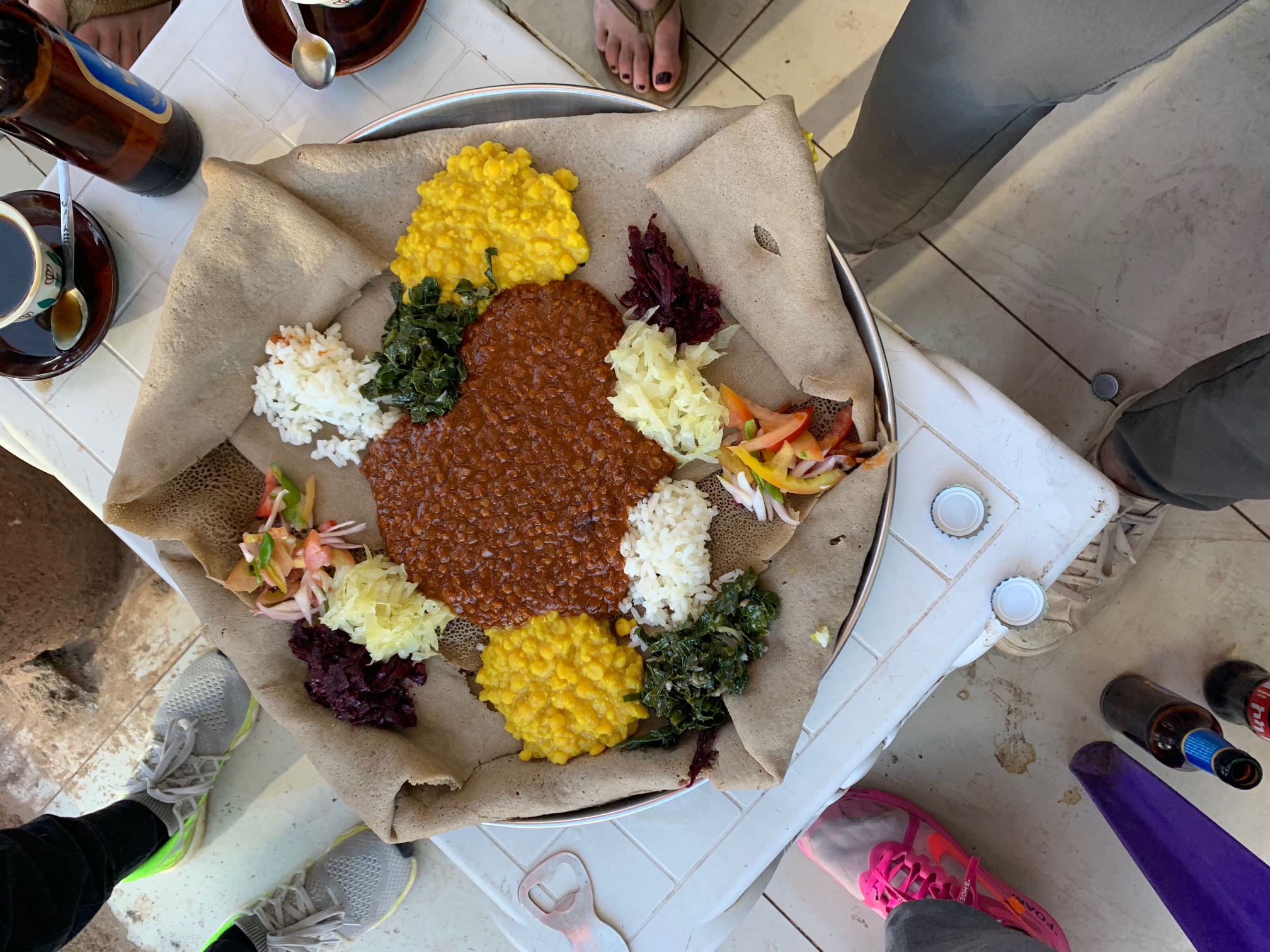 The next morning we departed for Bekoji, a remote village in the highlands of Ethiopia about a 5 hour drive from Addis, that has produced world class runners and olympic medalists such as Derartu Tulu, Kenenisa Bekele, and Tirunesh and Genzebe Dibaba. Bekoji itself sits at 9,200 feet altitude, about 3,000-4,000 feet higher than most US elite runners train at in Flagstaff or Boulder. Altitude training helps improve performance in long distance running by increasing red blood cell mass, EPO levels, and helps to increase VO2 max.

There is only one road to Bekoji - and luckily for us, it is now a paved one. But 10 years ago, the road to Bekoji from Addis was made of dirt. Along the drive there were sections where we had to pull off to the side and drive on a dusty dirt road for a few miles as the road is still under construction.

Once we arrived in Bekoji, we went straight to the school that the girls of Girls Gotta Run attend, where we had the opportunity to meet the girls and mothers in the program. They greeted us with a huge celebration, clapping and singing, and the mothers had prepared a meal for us as well as Bunna, traditional Ethiopian coffee. Afterwards, we did formal introductions with everyone, which had to be translated through two languages - from English to Amharic (the primary language spoken to Ethiopia) to Afaan Oromoo, the regional language in Bekoji. The language and cultural barrier felt intense on day one. We all wanted to connect with the girls. Connecting with teenage girls is hard even when you speak the language! It was a bit intimidating at first. 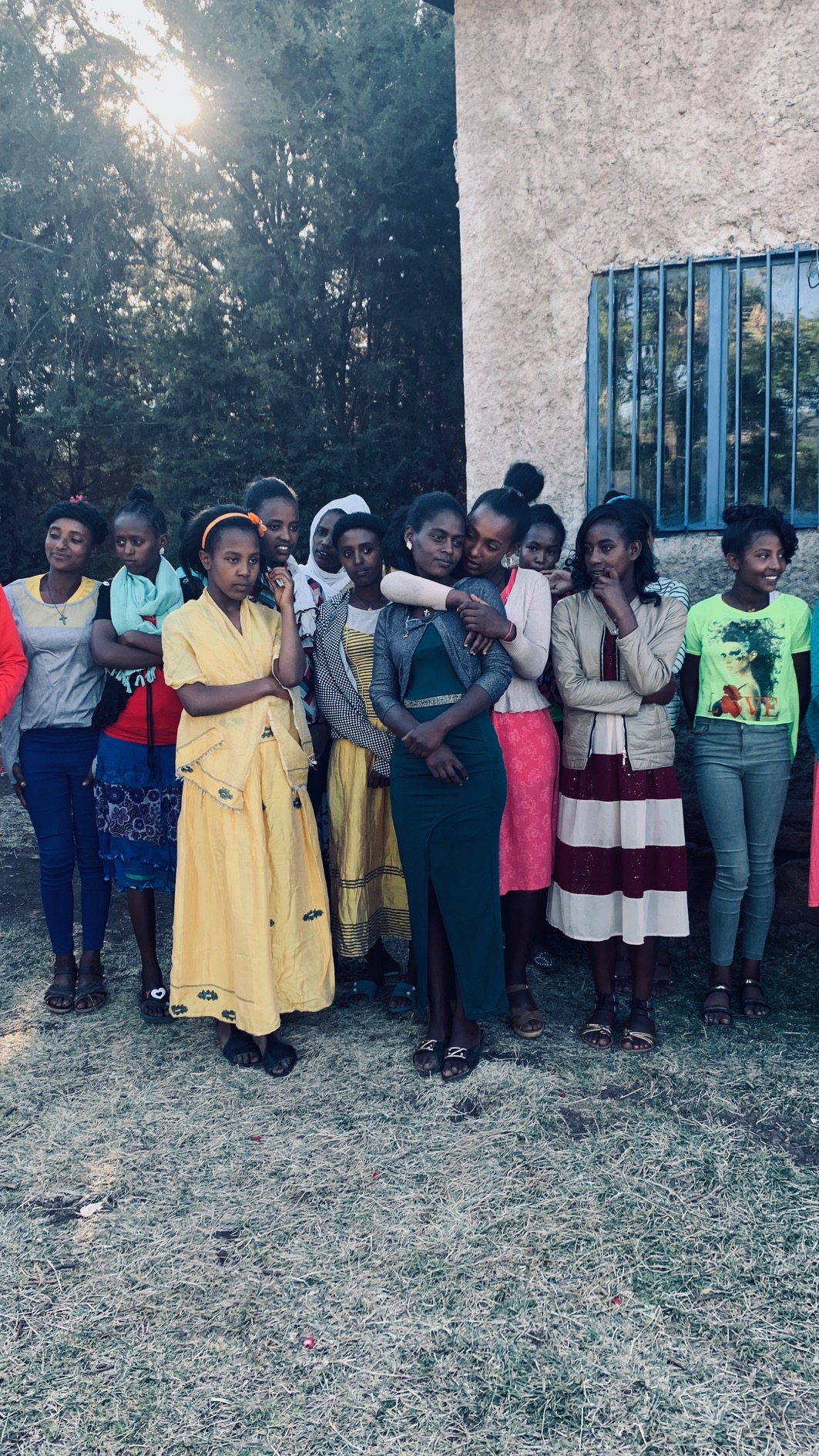 The next day we had a full agenda. We woke up at 6:00 a.m. to attend one of the girl's sessions. On this day, it was a session in the forest about 5 kilometers away. It was supposedly a “light workout” for their upcoming race, which included about 20 minutes of a jogging warm up, 20 minutes of drills and strides, and 30 minutes of a “fartlek” (a common term in running meaning “speed play” in Swedish), of 1 minute of all-out hard running, followed by 1 minute of recovery. All of this was done on muddy, soft forest ground, weaving in and out of trees, with very little available oxygen. Only two of the international athletes made it through the entire workout, including my coach, a 2:32 marathoner, and an elite female 5k runner from Boston. I was humbled 5 minutes into the workout, gasping for air and tried to jump back in as I could.

After the workout, we visited the school the girls attend while it was in session, which was one of my favorite moments of the trip. The kids at the school were so excited to have us there, and ended up following us out of the school, holding our hands, and putting their arms around us all the way to the market. The market in Bekoji is massive - it’s basically the only place to shop and because nobody has refrigeration, attending the market for food is a daily activity. They sell everything from tea and spices, to green coffee beans, scarves, blankets and baskets to hold Injera to goats and chickens.

After the market we had the opportunity to do a home visit with one of the girls in the program. We were told that the home we visited was one of the bigger homes, for a family of three women. It was a mud hut with a small kitchen, and one room consisting of a single bed and a few chairs. They prepared a traditional Ethiopian coffee ceremony, starting with roasting fresh green coffee beans for about 15 minutes, then grinding them with a mortar and pestle, before brewing the coffee. It was served with raw cane sugar and a pungent herb called Tena’adam, as well as popcorn and bread.

Departed Bekoji for the Bale Mountains, exactly 100 miles and about a 3 hour drive away! Once in the Bale Mountains, we were briefed on the relay logistics, then we had the opportunity to see wildlife in the grasslands such as Baboons, Nyala, and Warthogs! After another big group dinner, we all hit the sack early for a 6 a.m. relay start time the next day. 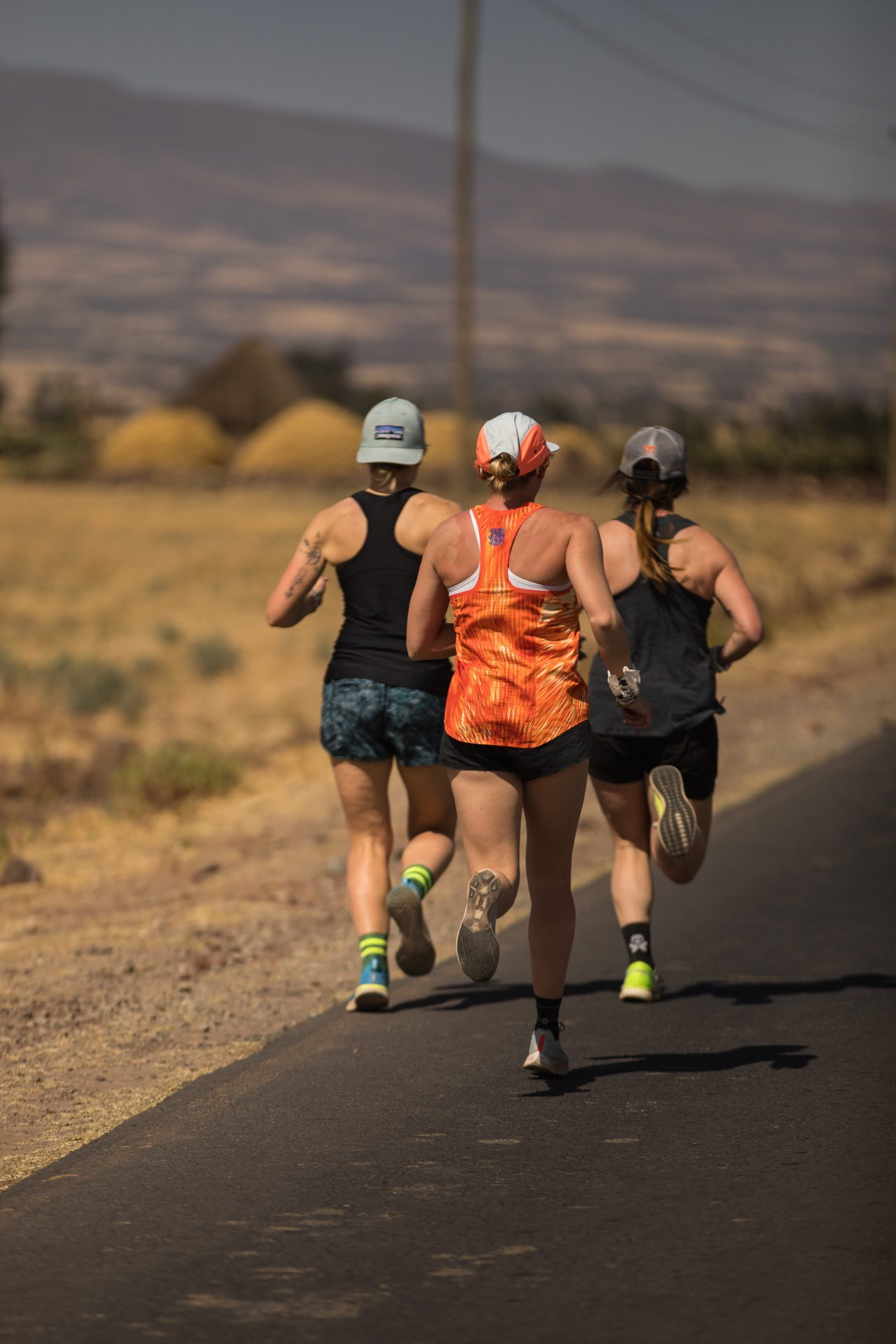 Relay day! We started in the grasslands in the Bale Mountains at 6 a.m., and we all ran the first 5k together as a group, both as a celebration of the relay but also for safety reasons as baboons can be aggressive! After that, we were separated into three groups, each team taking on 50k (approximately 31 miles) each. The teams consisted of half international women (ferengi) and half girls (habesha). The first 50k leg was almost entirely climbing, starting from 8,000 feet and climbing to 12,000 feet at the highest point of the race, then back down. Leg 2, 50k-100k, was my team, which was in midday heat and sun (about 85 degrees fahrenheit), with rolling hills. The final leg was flat and rolling downhill as the sun set and into the dark, finishing in Bekoji.

The relay itself was something that even after 3 weeks of being back I had yet to put into words. Despite the language barrier, the excitement was so high that we created incredible relationships with the girls, singing, laughing, and having inside jokes by the end of the journey. The girls had never been out of Bekoji; had never stayed in a hotel; and had never traveled that kind of distance (either by car or by foot). The experience of watching the reaction of the locals in the villages and towns that we ran through, watching fifteen 12 - 16 year old Ethiopian girls running in shorts and t-shirts with 25 international women was eye-opening. It was something that they had never seen before, and with the past political climate in Ethiopia, even as of 6 months ago, was something that could never have been done. It was a true celebration of women’s empowerment through the lens of their national sport of long distance running. 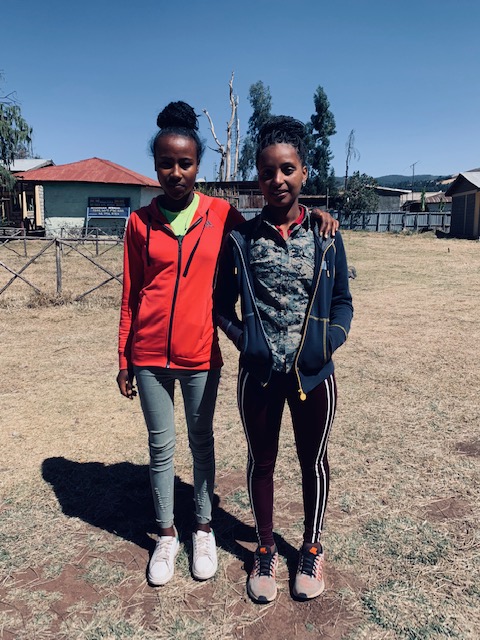 Celebrations! The town of Bekoji hosted a huge celebration with readings, musical performances, skits, food and coffee at their Town Hall. In the afternoon, most people departed in a bus back to Addis. Myself, and a few others on the trip, opted to stay in Bekoji for another night before heading back on Saturday to the city and flying home the next morning.

A lot of people have asked me what surprised me the most - which I have a hard time answering. I had never been to a country where things you take for granted are a luxury - like toilets, running water, toilet paper, and soap. I didn’t shower for 5 days because I had no running water, even in the nicer of the two hotels in Bekoji. There were no options for food at any meal, besides Injera and traditional Ethiopian food  (which while I love), definitely hits your system when you’re not used to it! But the people in Ethiopia were the most open and loving people I’ve met in my life - even walking down the street you see grown men with their arms around each other, and everybody holding hands. They welcomed us into their small town and started conversations with us with so much openness and love.  After traveling in South America where I was mugged, or cities in Europe where I was pickpocketed, I never once felt unsafe or that my belongings were at risk of being stolen, even in a town living below the global poverty line.

Above everything else, I was overwhelmingly inspired by the girls in the Girls Gotta Run program, who train at 7 a.m. six days a week. I saw first-hand where the money that flows through the program goes; and unlike other nonprofits I have worked with, it goes directly to the girls and their families.

Many of the girls that were malnourished last year, have gained weight and muscle mass in the past year because the program has enough money to afford to feed the girls meat once per week as well as glasses of milk. They train harder than anybody I’ve met, without the luxuries that most of us know here in New York, often training in the same outfit every day, wearing shoes without laces or no sports bras. While they have the support of donors and brands, they are also 12-16 year old girls growing fast and going through puberty, and the program is rapidly growing, so clothing is outgrown quickly or there is not always enough to go around to all of the athletes.

I’m looking forward to going back Bekoji later this year, hopefully for International Day of the Girl, to continue my work with Girls Gotta Run and spend more time with the girls in the program as it exponentially grows!

If you’re still interested in donating, feel free to reach out to me directly at chelsea@pongopower.com!

Interested in learning how to run pain free? Come in for a fitness assessment with Chelsea or one of our other personal trainers!

Questions? Fill out this form to connect.