The art of finding balance between work and play…

Labor Day weekend has come and gone. It is time to create balance in our lives this fall.

At Pongo Power, we are firm believers in leading a well-rounded lifestyle. Health and wellness are cultivated on the foundation of a daily practice of self-care which always includes exercise and nutrition as well as relaxation, connection, and laughter. Finding joy in life’s delicacies is part of the balance. And, yes, it can be a delicate balance at times.

This September we're celebrating both fun and fitness. Please join us on Zoom for our 13th Anniversary Fundraiser on Friday, September 18th. All events are free with a suggested donation. We are raising money for The Okra Project, which provides home-cooked meals for Black trans people. You can donate to the Okra Project here.

We'll have events all day and evening. Learn about pairing wine and cheese at 4 pm with the amazing Leigh Michelle Power, followed by live music with Deborah Smith, Doug Cox, and Lucas Papaelias. At 7 pm, we'll learn all about whiskey with a tasting led by international marathon runner Jordan Zimmerman. Finally, we'll have a dance party featuring DJ Model T (Tanya Perez.)

Pre-order your cheese, and get a discount! Click here to RSVP for Wine & Cheese Pairing and receive a 10% discount code for Murray's Cheese.

You can also click here to RSVP for Whiskey Tasting and receive a whiskey discount code. 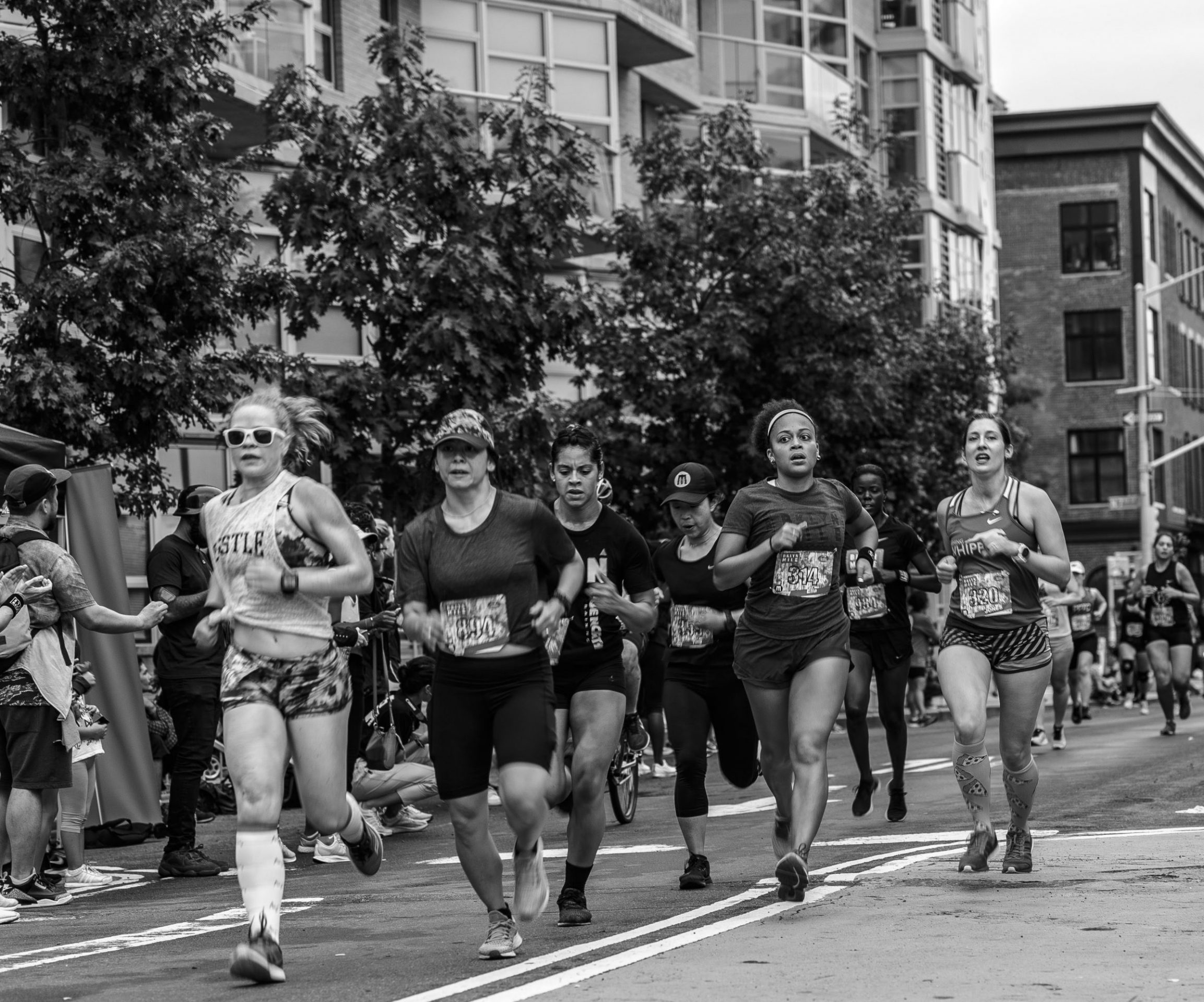 From running along a moat surrounding an ancient French castle to teaching about the flavor profile of a fine spirit on a world stage… meet our tasting experts Jordan and Leigh.

These ladies are master educators in their industries, and they’re also dedicated and experienced athletes who put in as much time challenging their fitness goals as they do sharing spirits!

We caught up with Leigh and Jordan to take a look inside their worlds and catch a glimpse of what they’ll be sharing with us during their tasting events on Sept. 18th! 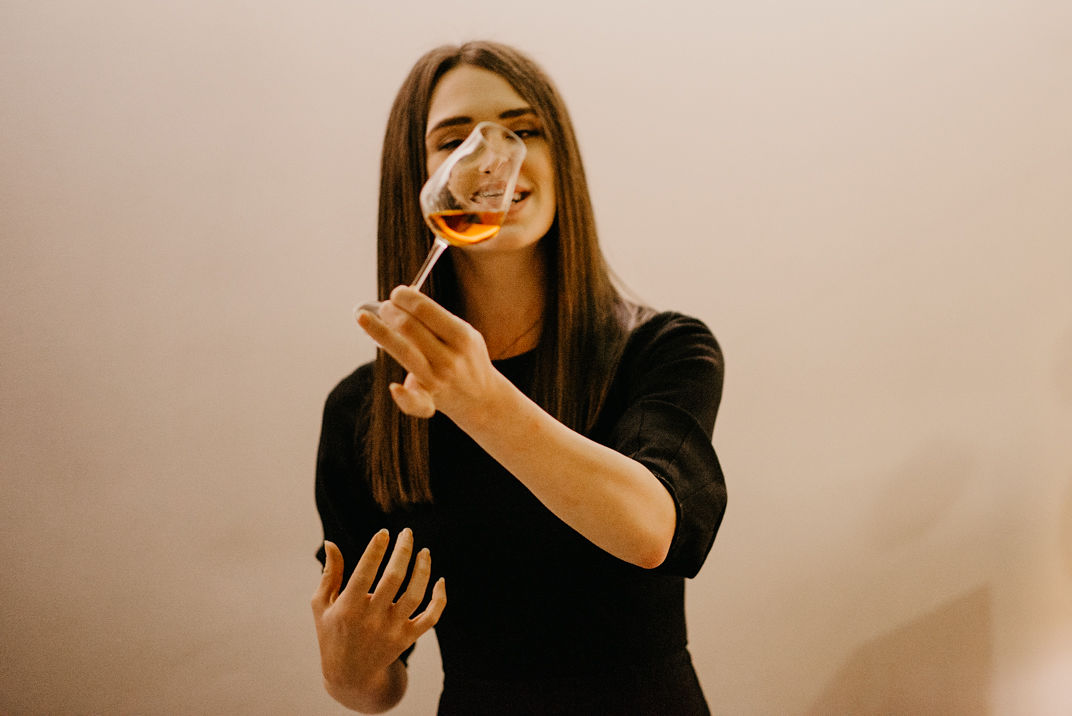 Pongo Power: You’re an accomplished athlete as well as a respected professional in the Spirits & Beverage industry - how do you find a balance between those two worlds?

Leigh Power: Finding balance between health, wellness, and joie de vivre is always a work in progress. I try to schedule my fitness in the same way as I schedule my professional life. I think as it becomes a routine and a flag on the calendar, I am much more accountable. As well, if I have an early morning workout scheduled, I will definitely consider my beverage choices the night before more carefully.

Jordan Zimmerman: To keep from burning the candle at both ends, I make sure to carve out very specific time for both my work and my workouts. Emails and text messages are not allowed on my runs — no matter how "urgent." Similarly, I'm not one to schedule a run in the middle of a work day. I find that approaching both with a dedicated mind rather than a distracted one helps me fully immerse and reap the benefits of both activities.

That, and being honest with myself when I need rest — and taking it. Hard workers need true weekends and a hard runner needs rest days. I spent my first few years thinking I needed neither, and it quickly wore down my body as well as the joy I could derive from both loves. Today, balance is key to being able to continue to enjoy both pursuits.

Leigh: Haha! Well, I was a competitive athlete in high school, so fitness for sure! I hadn't discovered the joys of a finely crafted cocktail in 9th grade.

When I graduated, I went to culinary school and into restaurants. The hours were long, and it was really taxing on the body in a different way. I fell out of a fitness routine, and beverages, wine in particular, took a bigger priority. It took a few years to get back into a balanced lifestyle. That was actually when I got into running, and it added a lot more structure into my life!

Jordan: It's hard to say! Before I was running marathons, I was running because I couldn't afford a gym membership. It was about that time that I was working for Murray's Cheese in New York, managing the classroom in which we'd host numerous paring classes per week — including those featuring spirits and not just wine. I left the cheese biz and ramped up the running, all the while taking sommelier and spirits education courses on the side.

I'm so thankful to have developed a strong running practice before I found my dream job in spirits, however — it's really given me a great activity to which I can dedicate myself outside of my work and develop an identity that's not just "The Whiskey Girl." 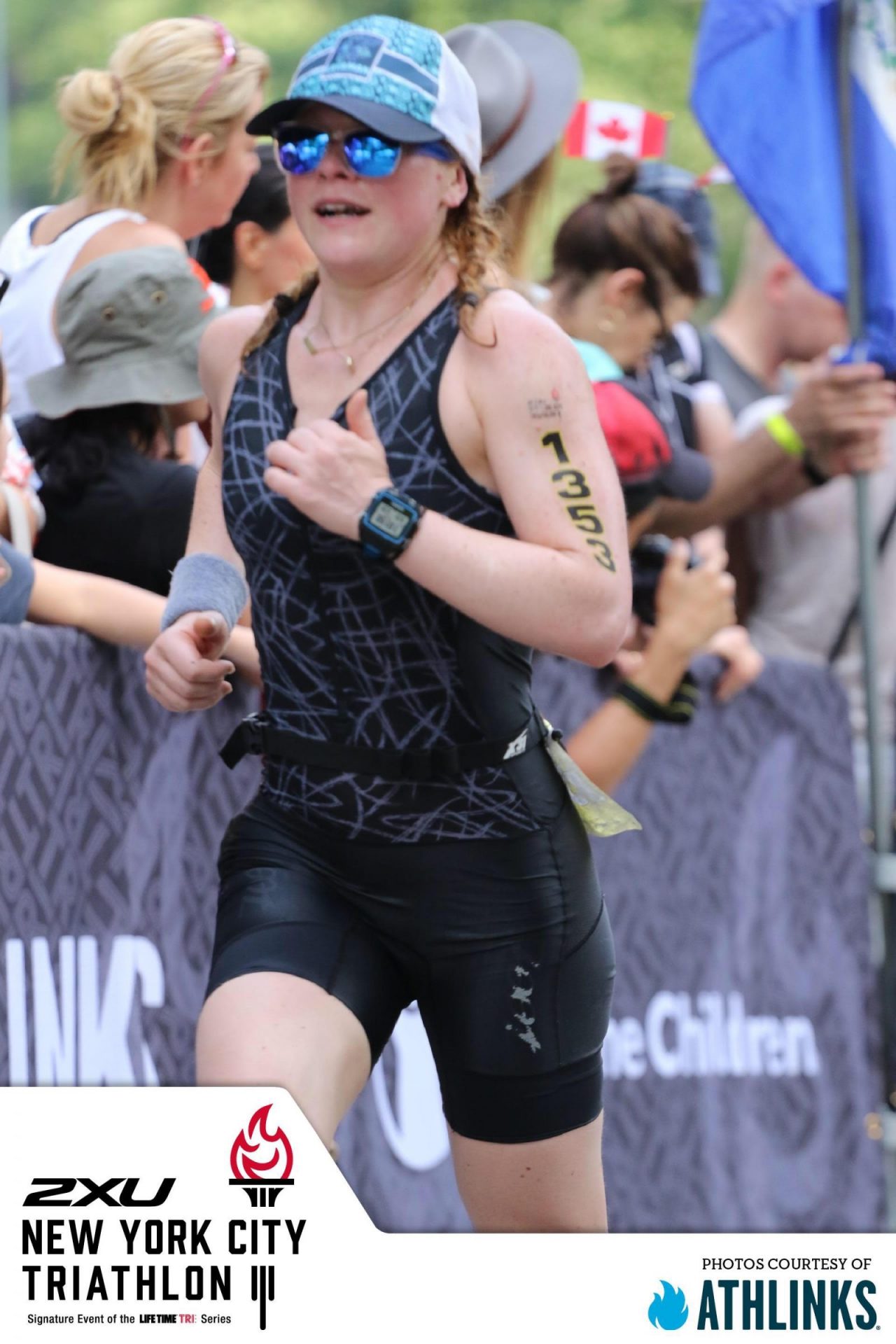 PP: You’ve both competed in international races. What has been your most memorable competition?

Leigh: I've been so lucky to have the opportunity to travel and to experience new locations in such a unique way. I always plan a few runs on any trip I take. I have run along the boardwalk in Atlantic City, over the canals in Amsterdam, and along a coastal trail in Kauai, Hawaii.

I would say the Chantilly Triathlon was the most unique competition I have ever been a part of. It took place on the castle grounds of a Chateau in Chantilly, France — about 45 minutes from Paris.

While the setting was incredible, the race itself was a little chaotic. We swam in the castle moat as the first leg of the triathlon, which was some of the muckiest water I have ever been in! Then through the French countryside on the bike. We would bike through these tiny towns, and they are all cobblestone streets! I was so petrified I was going to snag my road bike tire in between the cobblestones. Fortunately, I made it through safe, and loved hearing the locals cheering "Allez! Allez!"

The final leg of the triathlon is the run, and it was through the castle grounds, around the horse stables, through the gardens, and around a cascading fountain to the finish line. It was quite the experience!

Jordan: The Berlin Marathon was unlike anything I've ever experienced. The weather was bright and sunny, the course was stunning and held hundreds of years more history than the streets of New York (although, the NYC Marathon will forever be my favorite race!) The distance markers were kilometers exclusively, which totally threw me off and demanded lots of humor.

There's something about the grandeur of ancient streets that I've never seen replicated in an American marathon. I've also never smiled more during a grueling race, and let me tell you: the biergarten just outside of the Brandenburg Gate afforded me the absolute most delicious beer-drinking experience of my life. It's quite possible that a pint has never tasted more delicious than that one...okay, two.

PP: When you’re not running and there’s time to relax, what’s your favorite spirit to enjoy?

Leigh: I've been a huge fan of bourbon for a number of years. I love the sweeter caramel notes that can come out, and appreciate the diversity of the spirit. I am now in Canada, and have been trying some Canadian whiskeys. There is such a different flavor profile!

I am still a huge bourbon fan — however, there are some really fantastic gins being made in BC with local botanicals. Empress Gin has a butterfly pea flower infusion, which turns the gin from indigo to lavender in color when citrus is added. It makes for a fun party trick, but it's not all smoke and mirrors — the gin is tasty too.

Jordan: I really do love a classic, well-aged American whiskey. While I shouldn't play favorites, there's nothing like a neat glass of Woodford Double Oaked. So much vanilla, caramel, and baking spice goodness in a single pour! 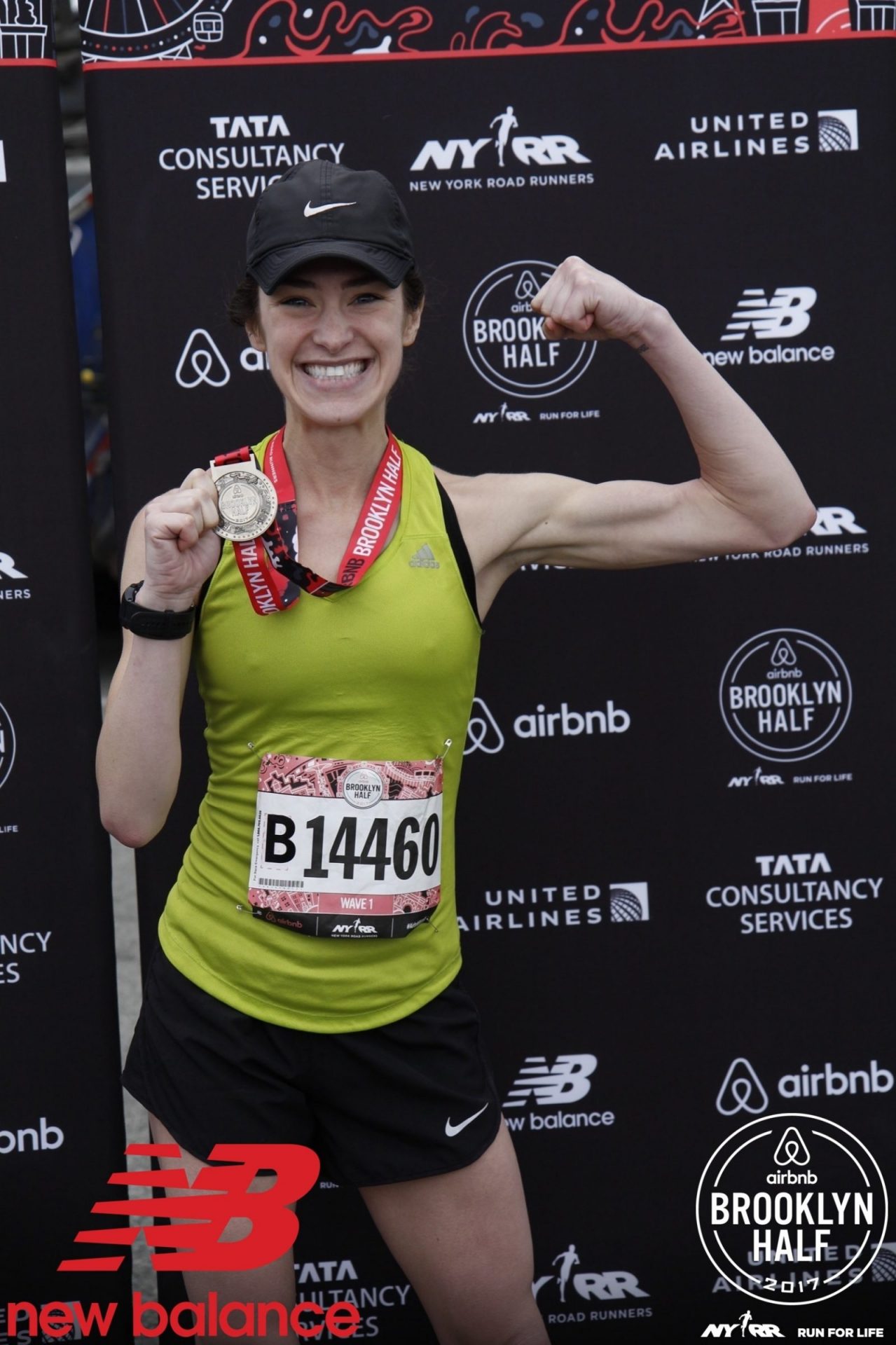 PP: Do you warm up before a run and, if so, what’s your favorite warm-up move?

Leigh: Yes, for sure! I have a morning yoga flow that I like doing, especially before a run. Cat-cow, down dog, and some focused breathing to pay attention to how I'm moving, where I feel tension, and if I'm noticing any imbalances. When I get out the door, I usually start out with a walk to get my body moving and warm. My hips tend to get tight, so I'll do pigeon stretch on a park bench and stretch out my hamstrings again. Then an easy jog for the first mile before getting into the workout.

Jordan: I'm mostly a post-run stretcher, but a good ten minutes with my Theragun on any aching areas gives me the release I need to hit the streets.

PP: We hear that your tasting event on Sept. 18th will be full of mouthwatering discoveries! Can you give us a hint about one juicy secret you’ll be sharing?

Leigh: We have on the list of cheeses a really special goat cheese from Vermont. I may or may not be sharing my favorite baby goat videos.

Jordan: One of my favorite things to do when teaching classes is to dispel commonly-held assumptions. In the world of fine wine, cheese, and whiskey, one of the most commonly held assumptions is that the only way for a product to be delicious is for it to be "craft," and the only way to be "craft" is to be produced by a "small" company. Just wait until you try a single-barreled version of the world's best-selling whiskey. It'll change hearts and minds!

We can not WAIT to get in on even more juicy details of what these incredible women have to share with us!

We truly hope you’ll join the fun as we level up on our wine, cheese, and whisky knowledge! Check out all of our events here!

Our "Lucky" 13: Honoring 13 Years of Being in Business

Nutrition in the Age of Uncertainty

We are so excited to book your Fitness Assessment! Fill out the form below. 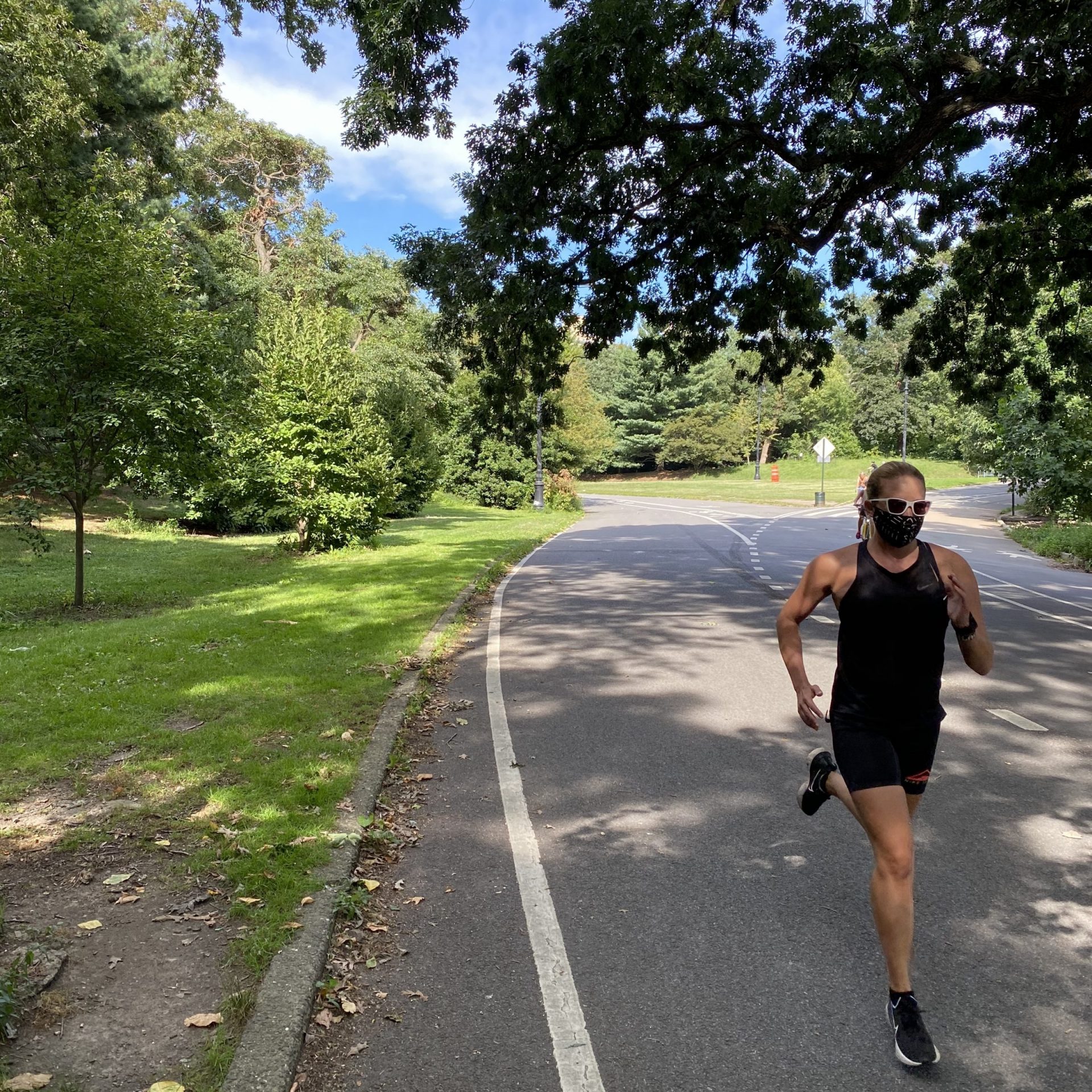 Get Back Into Your Routine With a Buddy!Healthy Lifestyle, Pongology